Steve's Gay 90's restaurant was located at 5238-40 South Tacoma Way in South Tacoma, Washington. Originally known as Steve's Cafe, the restaurant was opened by Steve Pease and John Stanley in 1941. After a few years of operation the name was changed to better fit its atmosphere and decor. 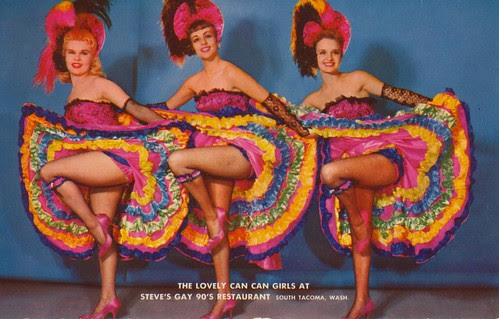 The restaurant offered cocktails and American food served smorgasbord style for a nominal charge, with dining music  and entertainment in the evening. The Gay Nineties had a smorgasbord table and booths decorated to appear like "surreys with fringe on top." Checked table cloths and wagon wheel chandeliers complete the down home look.

In the mid-fifties, Steve's added to their unique treasure trove an actual cable car, converted to street driving, bought at auction in San Francisco and driven to Tacoma. The Cable Car Room then opened with replicas of Tacoma and San Francisco cable cars as booths in the cocktail lounge. The crowning gem was the Opera House, opened in a mid fifties expansion, furnished with antiques from the South Tacoma mansions and featuring a twice nightly floor show with can can girls, among other performers.

Sadly, due to years of declining business, Steve's business partner "redistributing" restaurant, and changing tastes, Steve's Gay 90's Restaurant closed its doors in 1977. The building appears to be empty, but the shell of the sign survives.

Special thanks to the Tacoma Public Library for the information and some of the text above. You can see nearly 100 images of Steve's from the Library's fantastic image archive here. 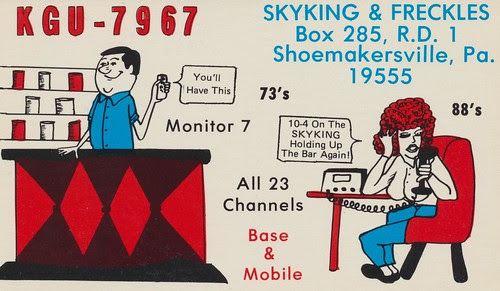 Skyking and Freckles! Skyking wants to drink away the pain and the large-chested Freckles is alerting someone somewhere that Skyking is holding up the bar. I had no idea that there was a town in Pennsylvania called Shoemakersville. It makes me imagine an entire town of elves and cobblers.